The Lloyd Center winter waterfowl survey entered its 31st season, and the first count held on Sunday December 3rd, took place during the Full Frost Moon, which was the only “Supermoon” of 2017.

A Supermoon occurs when the “Lunar Perigee”, or the moon’s closest point to Earth in its orbit, and the Full moon, occur less than one day apart. A full (or new) moon of course, brings the expectations of high tides, and indeed, extremely high tides were forecast. High tides can result in widely dispersed birds hidden along the edges of systems, and access difficulty for some sites. Considering also a lower count in early December when temperatures average warmer and many waterfowl are yet to arrive, an unusually low count seemed possible.

As it turns out, this count total of 5,905 birds exceeded last December’s total by 608 birds, and was the highest December total in a decade! A major factor was stellar survey conditions, including comfortable to warm temperatures, and no breeze whatsoever, such that hands stayed warm and scopes remained steady. Calm waters are a blessing, especially for counting bufflehead which are small and constantly diving and may be obscured during rough conditions. Some volunteers also started later during lower tides.

Briggs Marsh (1,853) had extremely high numbers, more than the entire Westport River! The West Branch (662) of the Westport River also had much higher birds than most other sites. Both of these sites showed large increases in totals from a year ago. At Briggs, Mute Swan, American Wigeon, and overall scaup species surpassed 300 individuals, while Canada Goose, Brant, American Black Duck, Mallard, Greater Scaup, Lesser Scaup, and Bufflehead, all had greater than 100 birds. Counts were highest at Briggs for each of these species except for black ducks. Lesser Scaup (190) increased considerably overall, and Brant (129) numbers are the second highest total ever, and the highest December count on record. Ring-necked Ducks (5) exemplify less common species that depict the high waterfowl diversity seen at this unique site on any given count.

The largest species increases were for the familiar Bufflehead and American Black Duck, respectively, with both species having highest totals at the West Branch of the Westport River. The also common Red-breasted Mergansers had their highest total on the West Branch as well. The healthy increase in black ducks after no change last December is particularly encouraging, and indicates a healthy Canadian population that migrates to our coastal systems.

The largest decline occurred for American Wigeon, although numbers have ranged high for the species in recent counts, and last December they had increased. This shows that while we monitor annual trends, short term fluctuations aren’t necessarily indicative of population trends. For example, last December Bufflehead and other common divers had shown declines, but increased this year. Although a sizeable decline occurred for the less abundant Mute Swan, they had increased considerably last December. We also know full well that a small decline in Canada Geese means nothing, as the robust population will be here in full force come January when freshwater freezes. 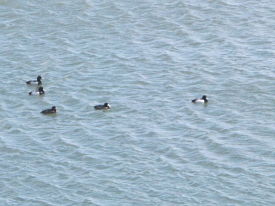 However, it’s worth noting that the waterfowl associated with human use are influenced by additional factors. Canada Geese feed on grassy areas and mallards flock to human feeding stations, with both species having robust populations regardless of our results. Mute Swans also live in human use areas, but culling operations against this non-native species could ultimately cause a decline, and so annual trends for the species may be more telling. Many mysteries to solve; tune in next January for count two!