The Slocum River Estuary has been the focus of fish ecology studies for over 50 years. This summer, the Lloyd Center partnered with UMass Dartmouth through a National Science Foundation grant providing summer research experience for undergraduates, to evaluate finfish beach seining records going back to 1966, with the goal of assessing how our changing ocean environment might have affected fish diversity and abundance in these estuaries. The study started with a new round of field work, with students and volunteers repeating as closely as possible the finfish seine collections which had not been conducted since 2006.

In the past, surveys of fish populations have been conducted in the Slocum and Little Rivers to provide a look at both species diversity and abundance, which provides comparison to see how species composition may change over time. Surveys were conducted from 1966-1968, 1990-1991, and more recently in 2005-2006 as part of the Lloyd Center’s “Turn-the-Tide” project. A comparable study had also been conducted from 1966-1967 in the Westport River.

Sampling stations were established in the estuaries including five in the Slocum River and two in Little River. Every two weeks, the stations were sampled at lower and incoming tides with a large fifty-foot seine net with all fish counted and identified to species. The same Little River stations were used with three stations selected from the Slocum River which were sampled in past studies. This included Gaffney Landing which was sampled in earlier studies and the mouth of the Slocum at Demarest Lloyd which was added in 2005 for Turn-the-Tide. 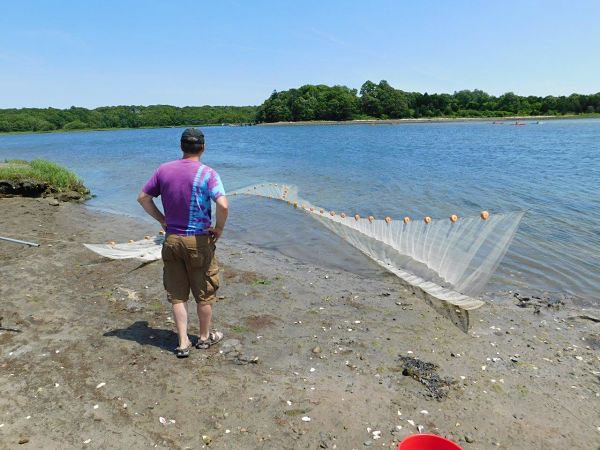 A site sampled in earlier studies but eliminated from Turn-the-Tide as outside the area of estuary impacts was the open bay off Barney’s Joy. While less subject to adverse land use impacts that degrade water quality, this station has extensive eelgrass beds which attracts a different fish community including sub-tropical species, and helps depict overall fish diversity present in the region.

This year’s study, conducted in collaboration with the University of Massachusetts Dartmouth which received funding from the National Science Foundation REU for Integrative Marine Biology, was an intensive summer study of the fish in the Slocum and Little Rivers that replicated past work. The project was overseen by Professor Kathryn Kavanagh, Ph.D.

University of Massachusetts Dartmouth summer undergraduate student Lily Uttecht led the field effort with the help of other volunteers and Lloyd Center for the Environment staff. Ms. Uttecht also compiled the final data.

The four most common species were Atlantic Silverside, Menhaden, Mummichog, Striped Killifish, and four-spined stickleback, the same assemblage that ranked highest in 2006. These species are common in shallow estuarine waters. The similarity with previous samples suggests that the most common species in the Slocum and Little Rivers have remained the same since the 1960’s.

With warming oceans due to climate change, special attention was paid to species whose range is typically farther south, to see if warmer temperatures would bring more southern species. Warm eddies from the Gulf Stream bring southern visitors every year, but these southern species typically do not survive the winter. This year we found the first Slocum River seine records of the tropical Cornet Fish, Gulf Stream Flounder, and Lined Seahorse. These species were not recorded in the beach seine studies from the previous 50 years. Of particular note, the Lined Seahorse was found even in the early summer samples suggesting they survived overwintering. Some other highlights included a high number of Pufferfish caught on a particularly good haul at Barneys Joy, and huge Menhaden haul at Little River where a large Oyster Toadfish was also caught.

We thank this group and the University of Massachusetts Dartmouth for providing the Lloyd Center the opportunity to help coordinate the effort, which can be a foundation for work next year.