by Jamie Bogart, Lloyd Center for the Environment Research Associate 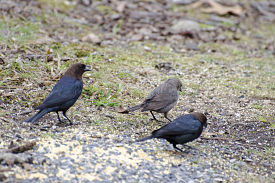 On November 19th, during our second week of the new FeederWatch season, two Dark- eyed Juncos emerged from the forest understory and landed beneath our bird feeder station. Juncos are those unmistakable dark gray (northeast subpopulation aka “Slate colored” Junco) songbirds which are a familiar sight on snow-covered ground beneath feeders during winter. While the familiar resident forest species have established niches at the feeders above from which they come and go, flocks of juncos are picking away at seed below at ground level. In southeastern New England, juncos are a migrant only present during fall and winter, making their arrival a true indicator that feeder season is upon us.

The Lloyd Center feeds birds year-round as part of the ‘Biodiversity Initiative” which, among other purposes, is aimed at detecting range shifts in species in response to climate change. As part of this initiative, the Lloyd Center takes part in “FeederWatch”, a volunteer-based effort throughout the U.S. and Canada coordinated by the Cornell Lab of Ornithology in Ithaca, N.Y. FeederWatch focuses on bird feeder use from November to April, of course including winter when reliance upon backyard feeders is high.

The primary objective of FeederWatch is to gain insight about winter bird species distribution and abundance, which ultimately depicts the health of bird populations. Through FeederWatch, scientists learn about long term trends in winter distribution and abundance, timing and extent of winter “irruptions” (years of unusually high abundance of certain species), expansions or contractions of winter ranges, food varieties and environmental factors attracting birds to feeders, and also any trends in disease transmission between birds at feeders. 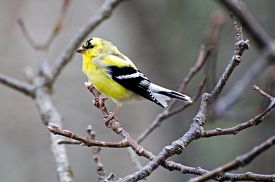 For the 2018-2019 season in the Northeast, familiar forest species seen at high abundance were Black-capped Chickadee, Downy Woodpecker, Dark-eye Junco, Northern Cardinal, and Mourning Dove (Cornell Lab of Ornithology). At the Lloyd Center, each of these was also seen frequently, with Mourning Dove the most abundant species and Northern Cardinal having their second highest count since surveys began. Both of these species benefit from cleared areas at edges of forest, both of which are habitat features present at the Lloyd Center. For the two most familiar forest interior feeder species, Tufted Titmice continue to command the feeder station as second in abundance only to the ground dwelling Mourning Doves, and Black-capped Chickadees reached their highest abundance at our feeders this past season. After a couple of quieter seasons, Brown-headed Cowbird numbers increased again last season.

Throughout the Northeast, sightings of Red-breasted Nuthatches increased, and ours returned last season. Unlike our White-breasted Nuthatch, this species trends further north in coniferous forests. Declines for certain species depict regional trends, but also may simply show how relocating feeders a short distance may influence bird use locally. Our feeders over the past year have been moved from the main facility down the hill near the “Bond House classroom” to avoid disturbance from renovation activities. After consecutive seasons of reaching by far the highest abundance of any feeder bird, American Goldfinch was for the second straight season virtually non-existent. For finches, seed crop in boreal regions are useful for predicting numbers at feeders here, and in recent years goldfinches have just stayed north to feed on the hefty pine cone crop. Red-winged Blackbirds, after consecutive seasons numbering in the hundreds at our feeders, reached their lowest numbers since counts began. Our original feeder location was at the immediate edge of a forested buffer zone that surrounds our kettle pond with Phragmites where red-wings nest, so the lower presence at feeders is not an indication of numbers of birds present, since flocks of red-wings continue to fill the trees on any given late winter day.

What interesting sightings and trends will occur during the 2019-2020 season? Stay tuned for updates on the season next year, and if you’re at the Lloyd Center for a hike, a program, or for whatever reason, check out our feeders! Who knows what you’ll find?