(a work in progress)

Explanations of the database categories can be found in the help file. 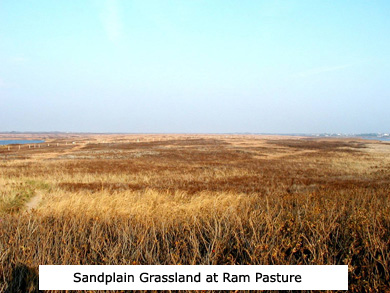 I can thank an ill-advised golf course proposal and the airport expansion for my immersion into the moth biodiversity on Nantucket. Although I made a couple of brief forays to Nantucket in the 1980’s to document the distribution of the Massachusetts endemic moth, the water-willow borer (Papaipema sulphurata) on the island; my main connection with the Nantucket moth fauna was through Frank Morton Jones and Charles P. Kimball’s 1943 publication, “The Lepidoptera of Nantucket and Marthas Vineyard Islands, Massachusetts”. This publication includes the moth data from Charles William Johnson’s 1930 pioneering publication, “A list of the Insect Fauna of Nantucket Massachusetts”. Both of these works were publications of The Nantucket Maria Mitchell Association, and, unbeknownst to the authors, provided the baseline for the period when sheep grazing and wood cutting maintained an almost treeless landscape; a landscape that would change over time.

Over sixty percent (24 out of 39) of the rare moth fauna listed in the Massachusetts Endangered Species Protection Act are found primarily in scrub oak barrens (9 species), coastal heathlands (8 species), or sandplain grasslands (7 species). Forty-four percent (17 of 39) are restricted to native heathland or shrubland (including scrub oak barrens) habitat as described by Wagner et al (2003); and this number represents only a fraction of the 56 species of “Conservation Concern” they list as uncommon shrubland/heathland specialists. For New England, many of these species reside in, and in some cases are restricted to, southeastern Massachusetts - particularly Marthas Vineyard and Nantucket. In fact, the sandplain grassland, coastal heathland and scrub oak habitats on Massachusetts offshore islands have been identified as significant globally rare natural communities (Swain & Kearsley, 2000). 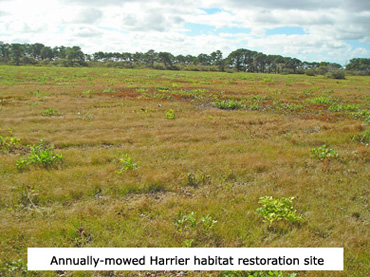 With the cessation of sheep grazing and fire suppression, the small, scattered tree islands, mostly associated with wetlands; and shrublands, particularly scrub oak, rapidly expanded in acreage. Sorrie & Dunwiddie (1996) documented the island’s present day flora, and chronicled the threat of vegetational succession to the island’s rare plants. Subsequently, much habitat restoration work through mowing and prescribed burns has been done to maintain and/or restore two globally rare habitats on Nantucket: the sandplain grasslands and the coastal heathlands.

These efforts were focused on conservation of sandplain grasslands and heathlands for state-listed plants as well as the Northern Harrier, Short-eared Owl, and other grassland birds, with little attention to insects. As a result, until very recently, large areas of scrub oak barrens have been developed or returned to heathland habitat. 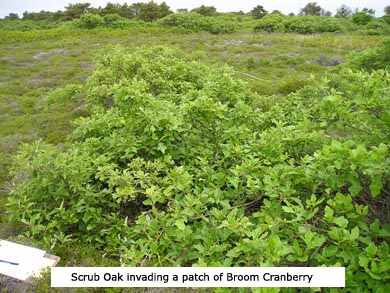 Seventeen species currently listed as rare in the Massachusetts Endangered Species Act were documented by Jones and Kimball through the early 1940’s. However, only two (Hemileuca maia and Catocala herodias) were scrub oak feeders; and in 2000, only 12 species were listed for Nantucket. During five years (2000, 2001, 2003, 2004, 2005) of inventory work, 19 state-listed rare moths have been documented, seven of which were not found by Jones & Kimball. Conversely, five state-listed species that were present up to the 1940’s have not been recorded since and were not encountered during this study. Thus, of the 24 state-listed macrolepidoptera recorded on Nantucket, only 14 species (58%) were recorded both by Kimball and by Mello. This change in state-listed species composition was similarly reflected in the entire macrolepidopteran fauna (excluding butterflies). Of the 738 species that have been documented on Nantucket by Kimball (575 species) and Mello (618 species) through 2006, only 455 species (62%) were documented by both researchers. Mello has documented 163 species not seen by Kimball, and conversely 120 species were not found between 2000 and 2005. This change in over a third of the recorded moth fauna on Nantucket was not anticipated by Kimball, but it reflects the changes in vegetation that have taken place on the island.

This database compares moth fauna found by Kimball, with that found in 511 light trap samples, about 15 spring/fall bait nights and a few daytime surveys during 2000-2005, with additional updates from 2006. 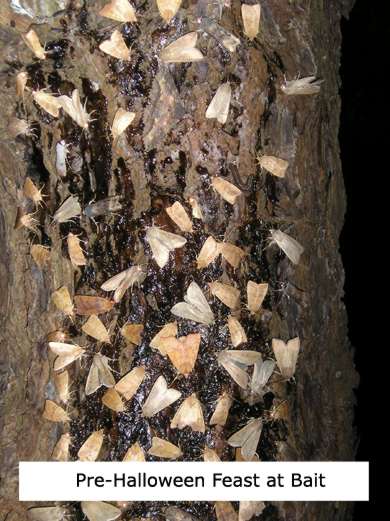 Most of this data has been collected from mid-April through early November, thus late fall and early spring fliers are under-represented in the database. The database does not include records from intervening collectors, none of whom have collected as comprehensively as in these two featured studies. This data is not complete, but as can be seen in below, the number of new species added per year has dropped to a trickle. However, forays into under-explored habitats and trips during early/late seasons on Nantucket over the next few years will continue to add species to this database.

Many organizations and individuals have supported this project. Thus thanks are extended to: The Massachusetts Environmental Trust, the Nantucket Conservation Foundation, the Nantucket Land Council, the Nantucket Land Bank, The Gilbert Verney Foundation, Wingwalker Initiatives, and The William P. Wharton Trust for initiating this project and funding the data collection and analysis. Support to publish this information on this website was provided by The EnTrust Fund. Logistical support was provided by the Maria Mitchell Association and the University of Massachusetts-Boston Nantucket Field Station.

The wealth of data collected between 2000 and 2005 would not have been possible without the help of interns and others who set traps, sorted through mounds of bugs and/or entered reams of data during this period. Thus thanks are extended to Glen Davis, Aaron Weed, Andrew Carreras, Jennifer Peloquin, Jamie Bogart, Alison Tracy, Cormac Collier and Emily Molden.

References (including those used in the database)

Johnson, Charles Willison & James H. Emerton, 1930. A list of the Insect Fauna of Nantucket, Massachusetts. With a List of the Spiders. Publications of The Nantucket Maria Mitchell Association. Vol. III No. 2. July, 1930. Nantucket, MA. 174p. & index

Tietz, H.M., 1972. An Index to the Described Life Histories, Early Stages and Hosts of the Macrolepidoptera of the Continental United States. Vol. I. Allyn Museum of Entomology, Sarasota, FL. 536 p.

Tietz, H.M., 1972. An Index to the Described Life Histories, Early Stages and Hosts of the Macrolepidoptera of the Continental United States. Vol. I. Allyn Museum of Entomology, Sarasota, FL. 536 p.

Search the Database
Scroll To Top