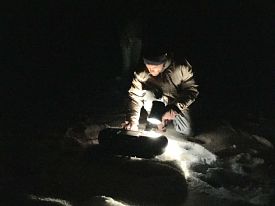 Jamie Bogart, a research associate from the Lloyd Center, plays a bird call during the Owl Prowl. Photo by: Seth Thomas

Beneath a dazzling starlit sky, a small group searched for owls in the woods, but, much to the birders chagrin, the birds of prey clearly didn’t give a hoot.

Over the weekend, about 10 people gathered at the Lloyd Center for the Environment for the “Owl Prowl.” The group met at 3:30 a.m. (yes, 3:30 a.m.) to trek through the woods in search of screech, barred and great horned owls.

The hope was to catch a glimpse of the night predators in the treetops. Simply hearing a far-off call echoing through the woods was a more likely scenario, and only one owl (possibly two) could be heard calling during the entire excursion.

But why so late at night? Why in the middle of winter?

“This is the best time to see the owls because of weather conditions,” said Jamie Bogart, research associate for the center and the guide for the evening. “It’s quiet. The wind is low. And, as raptors, they’re specialized for night living and night hunting.” 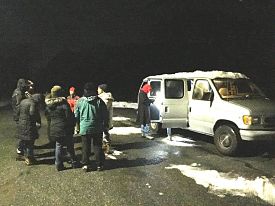 Getting ready to prowl Photo by: Seth Thomas

While the word “raptors” may call to mind the lithe, bloodthirsty dinosaurs from “Jurassic World,” in this case it refers to “birds of prey.”

These types of birds are typically characterized by their hooked beaks and sharp talons, both used for hunting and consuming other animals. Some larger species of owls will attack and eat anything as small as a rodent to as large as a Canada goose.

The birds have plenty of other adaptations that have geared them toward living in dark, woodland environments.

Owls, in particular, are noted for their wide facial discs that help propel sound for hearing. The tufts that appear on either side of some owls heads could be mistaken for ears, but the plumage is actually just ornamentation to make the birds appear larger and more menacing. The bird hears through holes on the side of its head.

More impressive is the birds’ sense of sight.

“They can see in dim light,” said Bogart. “They can sense a rodent in the leaves from a hundred yards away. They also have feathers that are silent in flight.” 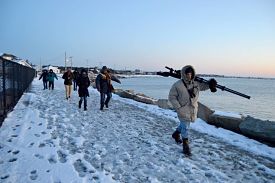 In the early morning hours of Feb. 7, Dartmouth’s owls were defined by another characteristic: total disregard for the prowlers who stayed up very late to hear their siren call.

Bogart led the crew around the area of the Lloyd Center building on Potomska Road. Equipped with a boombox and a cassette tape recording of various bird calls, Bogart tried to inspire an owl in the woods to call and respond.

Owls will hoot at one another as a means of announcing their presence, marking their territory, attracting one another or locating their offspring.

The group stood in total silence as Bogart played the tape, waiting to hear or see the nocturnal creatures. After several failed attempts, the crew hopped in the Lloyd Center’s van and traveled to the area of Allen Neck Road to find a willing avian participant.

Finally – at 5:29 a.m. – on the roadway that leads to Demarest Lloyd State Park, a screech owl heard the tape and answered the call with its distinctive two-toned, warbling hoot. 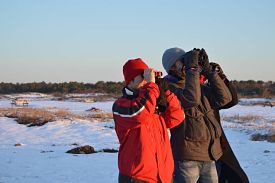 Birders peer through their binoculars on the beach. Photo by: Seth Thomas

Despite the birds’ lack of participation in the walk, the trip ended with a natural feature everyone could count on: the sunrise. After emerging from the woods, the group ventured to Gooseberry Island in Westport to see the brilliant orange sun peak out of the clouds.

Bogart said the weather patterns leading up to the event may have impacted the owls being out and about that evening. Particularly, the birds could busy restructuring their nests after the last snow storm.

For those looking for another opportunity to search for owls, Bogart will be leading a group out on March 24. Birders in need of beauty rest will be happy to note that the springtime outing is scheduled for 7 p.m.