With spring fast approaching and the Lloyd Center bustling with activity, it’s nice to give notice to the volunteers that are relied upon year after year. Two such comparable groups at work during the cold winter months include the winter waterfowl surveyors and beach walkers for the Seabird Ecological Assessment Network (SEANET). 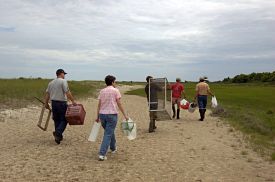 Completing its 25th season, the waterfowl survey documents waterfowl diversity and abundance in estuaries and coastal ponds from Tiverton, RI to Dartmouth, MA. The Lloyd Center continues the major task of analyzing data spanning two decades for this project.

Entering its 11th season collaborating with Tufts University, the SEANET project documents beached bird deposition along shoreline areas from Westport to Wareham. For SEANET, a vast database, on seabirds suffering mortality, is maintained at Tufts University. A snapshot of trends for each program follows below.

For waterfowl, two surveys are taken per season, an early December and late January count, with previous year comparisons often done by month. For example, December 2012 featured similar ice levels to 2011, but an increase in waterfowl numbers was observed for December 2012. For most common species, increases occurred for the Canada Goose and Bufflehead, while American Black Duck and Mallard showed little change. The January 2013 total was the lowest of surveys conducted over the previous two years due largely to extensive ice coverage. Compared to January 2012, this survey featured big declines in Canada Geese, Black Duck, Bufflehead, and Red-Breasted Merganser. The one big increase in January occurred for Mallard, which had their highest January numbers in three years. Common Goldeneye and Canada Goose are two species generally more abundant in late winter, so as expected, they were more abundant in the January portion of this season’s survey.

For SEANET, a recruitment workshop and beach walk at Nonquitt Beach was held in January and was attended by a mix of long-time and new volunteers. Between 2002 and 2012 in Buzzards Bay, numbers of beached birds have ranged from 1 (2007) to 39 (2003, 2009) annually, with 20 or more birds found during 5 other years over that span. Gulls and Common Eider are the most common species encountered, with loons, cormorants, gannets, shearwater, and winter waterfowl also washing up occasionally. Westport sites have had the most beached birds (due in part to high frequency of surveys) with Gooseberry (63) having the most records, and both Cherry and Webb (28) and Horseneck (33) also having considerable numbers of birds. According to data analyzed by Tufts staff, relatively low numbers of beached birds are found in Buzzards Bay because many don’t reach shore, some are hard to locate, and many don’t persist for long. On Cape Cod birds may persist longer, and detection rates are therefore higher than here in Buzzards Bay.

We thank the volunteers that keep these unfunded projects rolling, and help us answer various questions about different facets of our surrounding avian biodiversity. Periodically, more updates about these “hidden” projects will be provided.