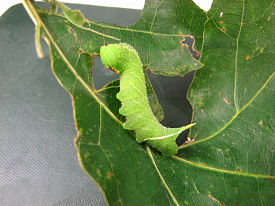 We are not talking about the pharoah-headed lion defending the pyramids in Egypt. Instead these sphinxes are a family of moths whose caterpillars (Figure 1), when at rest or threatened by a predator, assume a sphinx-like position. This large family of moths, with at least 43 species recorded from Massachusetts, has been observed by a number of Lepidopterists to be declining in the Northeast. Some species that were common during some of the older collectors’ youth are now hard to find. A good example is the Wild Cherry Sphinx (Figure 2) whose caterpillars were once regularly found on black cherry throughout the suburban vacant lots and fields in New Bedford’s south end, as well as porch lights on one’s backyard. It is now nearly absent in Massachusetts save for the offshore Islands of Nantucket and Martha’s Vineyard.

Against this backdrop, NatureServe, established in 1994 as the Association for Biodiversity Information, convened a workshop at Yale’s Peabody Museum to review preliminary data that they had complied. Seventeen Lepidopterists from New Jersey to Maine, including the Lloyd Center’s Research Director Mark Mello, were invited to add their observations and expertise, and to discuss the next steps needed to address the cause(s) of this perceived decline, to determine how widespread, and to understand the effects on overall regional biodiversity.

Several factors arose from this workshop. First, the existing data is “messy”. Prior to 1950, (and even to this day) collectors amassed specimens rather than recorded systematic data. Furthermore, “rarities” were actively sought so the number of these species in a collection might outnumber more common species. Without information on the collecting effort, quantitative comparisons are difficult, if not nearly impossible. Nevertheless, decline throughout the region for some of these species, particularly those that feed on Ash, was dramatic. So too, apparently, was the decline of “tomato hornworms”, a pair of species that were pests on tomatoes and tobacco crops fifty years ago, but now seldom reach pest status.

A litany of the usual suspects of moth decline were discussed, but with no consensus which might primarily be responsible for this decline. Pesticides, light pollution, introduced parasites, viruses or other pathogens, habitat fragmentation, were all mentioned but there seemed to be examples where any one of these could not be responsible for the perceived decline.

The group’s consensus was that long-term datasets within a given site or region have the highest value for determining trends. It so happens that the 30+ year weekly records of light trap data collected at the Lloyd Center is one of the longest datasets of its kind in the Northeast. In addition, data collected in the course of the many contracted surveys awarded to the Lloyd Center across Massachusetts and Rhode Island accounts for much of the records that NatureServe has for these two states. Although NatureServe’s project is winding down, there was significant interest among the assembled Lepidopterists to seek funding to develop a systematic monitoring plan to determine the extent of decline and hopefully halt or reverse it.  The Lloyd Center will most certainly be an integral part of this effort.